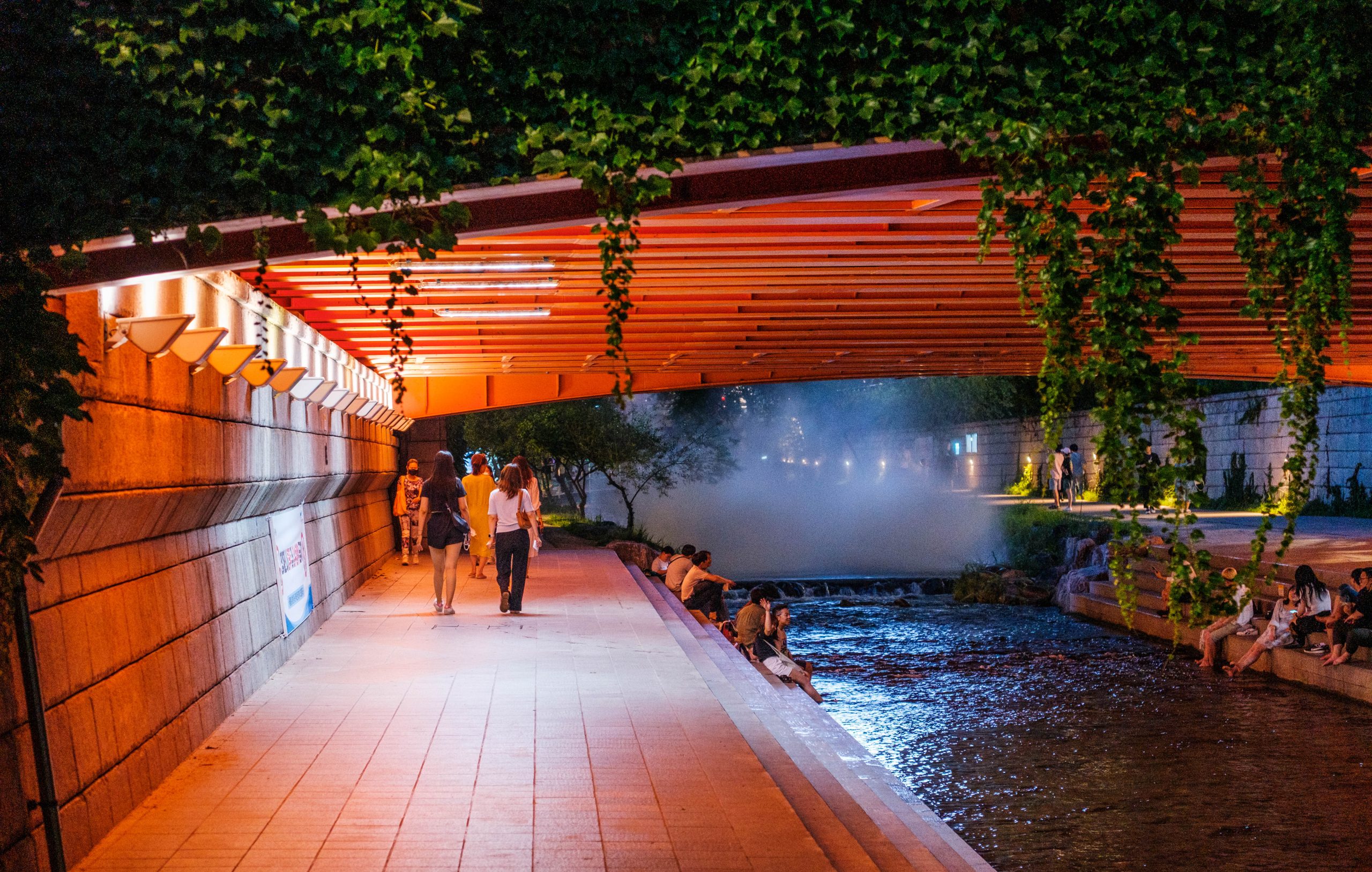 We did not know what to expect of South-Korea. It took us a long time to consider going to South-Korea. We heard a lot about North-Korea, but never about South-Korea.

South-Korea is a very safe place to visit. There are cameras on every street and people like to live by the rules. You will have to watch out for yourself, because some people are to focused on their phones and they will bump into you. We think this is because of the feeling of safety they have. Also, you can get snitched out very easily. We do think that this applies to the bigger cities.

The first time we came here, we noticed the people are very distant from each other. That is because of the respect they have for each other’s privacy. It seems, they like to be left alone. You will also find places, like bars or restaurants, that have tables for only one person. If you give them something, they will take it with two hands. If they hold something they will put that hand near the under arm to take the object. When entering a shop they will make a quick bow, if you want you can do the same.

The streets and buildings are very modern. They have toilets and places to sit. The living areas are rather small most of the times. You will find buildings places randomly next to each other and all the buildings look different.

Getting money is often a problem. There are a lot of ATMs, but there are only some that accept credit cards from abroad. You really have to find a global ATM and if you find one, get as much cash as you think you need.

Going with metro is very easy. There is a metro system in Seoul and in Busan. Before you go through the gates, you will find a few vending machines. One is for a single ride, one is for buying a T-money card, one that you give back the money for using the card and one is to reload T-money cards.

If you are planning to stay only for a few days in South-Korea, we advise you to get the one-way card. You can buy this card at a vending machine and is only available from place of departure to place of arrival on the day of purchase. After use you can find the machine to deposit you card and have deposit for the use of the card.

A T-money card is a card you can use almost everywhere even for busses. This card is also reloadable. It is very easy to use and after use you can also exchange the card for a deposit. This card is an option when you want to stay in South-Korea for a longer period. If you are outside of the city and you want to reload the card. You can go into a convenience store and reload them with cash.

The tourist-card is a card for tourist. For this card you have to pay a certain amount and it will be useable for a couple of days. You can choose between two to seven days. The more days you want to use this, the more you will have to pay. We bought these and we noticed that we had to use the metro six times a day to get our money back. After that we used this card as a T-money card and it worked really well. There was only one metro line we had to buy one-way tickets for, where our friends with normal T-money cards could go in.

The trains in South-Korea are very modern. They have a Bullet train and also normal trains. If you want you can buy a Korail Pass. You can find it on the website of KORAIL. You can also easily book a train ticket online via Korail (letskorail.com), 12Go: Book Trains, Buses, Ferries, Transfers & Flights or Book High-Speed Trains Around the World with Rail.Ninja. Korail is the direct way to buy the tickets. If you book your ticket via 12Go it is also possible, but they are a little more expensive. Rail.Ninja is also a good way to book the train, but we found out you can book most of the trains only in the weekend. Off course you can also buy tickets at the station itself, but most of the tickets are already sold out and you will have to wait for the next train.

The bullet train is called KTX. It is a train that goes more than 300 kilometres in an hour and it feels like a normal train. Withing 3,5 hours it goes from Seoul to Busan. It is the fastest train in Asia. If you want seats on this train, you really have to book in advance. You can also buy them at the station itself, but they probably will be sold out.

Most of the time we took the bus when we were on Jeju Island. They were just like local busses. We did not had to make a reservation for them and paid with our T-money card.

Car rental is kind of expensive in South-Korea. We chose to go everywhere by train, plain or metro. There are some places we wished we had a car. Like Jeju-island. We think the island is very nice to visit, but if you want to see anything, you definitely need a car. Otherwise, you have to take the bus and that takes a lot of time. Going with the bus from north to south takes at least one hour.

There are a lot of nice foods to eat. Maybe you already have read our blog Korean eating places. But in case you still have to. Here is our general information about the dishes in South-Korea.

Korean like to eat food that is sweet and sour. There are a lot of places where you can eat Korean BBQ, pancakes and Japanese food. These are the things you really have to try.

Different kinds of meat prepared on a bbq in front of you. Wrap the meat with lettuce, fill with some kimchi.

Already known by a lot of people

Cold or warm, depending on the kind of noodles. Differences in broth, meat and vegetables

Rice with vegetables in a bowl

Compressed rice cakes in a sweet and spice sauce

Dumplings are dough filled with kimchi, fish (shrimp) and pork, which are steamed or fried

Rolls with seaweed filled with rice, vegetables and meat of your choice. Compare to sushi they have more flavour and are bigger.

Toasted bread with eggs, ham, cheese, corn and a lot more. Normally, this is eaten as breakfast or lunch. For the people who expect the food to be savoury, it is the opposite. The food is very sweet. They use corn and sweet sauce.

It is a pancake filled with Kimchi. These pancakes are not available in a pancake restaurant.

Kimchi is usually fermented white cabbage with a blend of chillies and salt but sometimes other vegetables are used. This is mostly served with other dishes.

In Busan we went to a fish market where we ate crab. You can read about it here.

There are also a lot of local dishes you can eat. For instance we really liked Dagalbi in Chuncheon.

We recommend to find a food court in the neighbourhood where you are in, because they are much cheaper that the normal restaurants. You will find most of the food courts in the shopping mall and they are also very good.

There are some places we really recommend you to go. You can find them below.

Seoul has many places to visit and every neighbourhood has its own individuality. There are a lot of places you can visit.

The bus trip to the DMZ (Demilitarized Zone) is really one you must do. This is the border between North and South-Korea. It is rather expensive compare the other things you want to see, but we really loved it and we didn’t get to see the JSA (Joint Security Area). The JSA is the place where the negotiations are hold. The trip took around six hours. We booked it via www.vviptravel.com. You will also get a lot information about the DMZ.

The Grand Palace is a place where you really must go. It is really big and it has a lot of history.

The war memorial is free. When we walked through it, we were thinking. Remind me, why is the free again? It is really big and fun to walk through. They have everything.

The National Museum of Korea is also free. It is smaller than the War Memorial, but still impressive to walk through.

There are a lot of Hanok Villages in the country, but the one we liked the most is the one in Jeonju. Jeonju is one of the villages where people can dress themselves into former robes and the houses are still lived in.

We wanted to visit Seoraksan park before we decide to leave South-Korea, but we didn’t have the change anymore. This place seems to be one of the most know and most touristic places in South-Korea.

Busan is smaller than Seoul. It is easy to get to by train and by flight. The beach is really nice and the city itself is very modern.

In Busan there is also a fish market in which you really have to eat. At the first floor you can buy the fish and at the second floor you can eat it. We bought a crab of three kilo and eat it with four people.

Jeju Island supposed to be the touristic place where the Korean people go.

The east-coast is more expensive, because of the tourism. We haven’t been there, but we heard from the locals it is their vacation destination. The beaches are very nice.

K-pop is a big thing in South-Korea. Some of the groups you maybe already heard of like Black Pink and BTS. They supposed to be the most known. K-pop is a music made by the South-Korean to use as a sort of export product.

If you walk in the mall of maybe on the street, you’ll find a lot of shops with Anime or video games. On the metro you’ll also find a lot of people playing games on their phones.

These are the things that makes South-Korea Unique. On South-Korea Travel Destination » Tim and Ellen’s Blog (timellen.net) you can find our photos and read about our experience.